Early-early this morning, we were rousted out of bed by the door bell – Pops was startled to see a police officer wearing a Kevlar vest…. The officer apologized for waking us (guess the bed-head gave Pops away). Apparently, last night there were a ‘rash of car break-ins in our neighborhood’. (Our vehicle was locked in the garage, so it was safe. However, the eagle-eyed officer noticed that we had security cameras and wondered if they might show the street. — Yes, sir!) Not a great view, but enough to let us know when someone steps on our property and while the cameras show some of the street, they don’t actually show much of the neighbors’ houses. However, the officer was thrilled to find functional cameras and had a fine time checking last night’s archives. While it wasn’t the best picture, he now knows that a white pickup truck was involved…. He took our security cameras’ hard drive to make a recording & promised to return it, later today.
While I don’t know which cars were violated and/or what was taken, apparently about 20 were broken into.
Our ‘neighborhood butt-in-ski’ was out for a walk, just a bit ago, and smugly stated, “Bet a lot of garages get the clutter cleaned out this weekend.”  I betcha she is correct.

Pops’ reaction to the unexpected event was changing our cameras to the newer, more precise ones he’d purchased a few weeks ago, but hadn’t gotten around to switching with the older ones. In addition to our neighborhood garages getting decluttered, so the cars can park inside. I betcha more houses get new security systems and surveillance cameras.
So, the lesson, dear furiends, is to make sure you and your family protect the important things. Many of our neighbors have cars, which are apparently worth thousands of 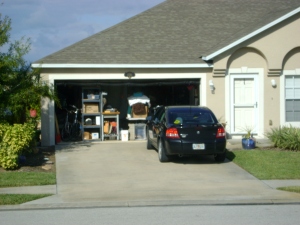 dollars, parked in their driveways, while their garages are jam-full of ‘stuff’, much of it broken – the total actual value is probably only a small fraction of their car’s value.
Mom doesn’t like clutter and swears by eBay, Craigslist, Good Will and Habitat for Humanity… She says using one of those turns clutter into space and cash, though apparently the later two options are tax deductions, which are more complicated to turn into cash…. If you wonder what I’m talking about, the jpg on the left is a neighbor’s garage. I assure you that Purr and I would not allow our staff to collect so much unused stuff!
Mr. M =^.^=

As part of the new GDPR regulation, please be notified that this site collects the number of clicks generated by individual countries in order to ascertain where interested parties live. IF you utilize the comments feature, we also collect your email address, so we can respond. We also collect your email address if you sign up to follow via email.